This was a really fun game to play. Cant wait until the release.

Reply
Damonoodle79 days ago(+2)
I'm a bit late to the madness. But loved the demo, couldn't have gone better.
Reply
videojuegos max87 days ago(+2)

love the game though the handy pals working on a farm they're not allowed to leave and having numbers rather than names does have some unfortunate implications....

What a fun demo! I'm really intrigued to see where this game goes, definitely gonna check out it when it fully releases! This is the video I made of me playing it for the first time :D

Amazing game. I was looking for something just like that, and finally I`m here enjoying this beautiful project. And also one thing, I am from country what you can dislike so I have some troubles with donations, how can I donate you another way from my location ? (Sorry for my English)

Rabbits, also known as bunnies or bunny rabbits, are small mammals in the family Leporidae of the order Lagomorpha. Oryctolagus cuniculus includes the European rabbit species and its descendants, the world's 305 breeds of domestic rabbit.

Enjoyed it! Added to the ol' Steam wishlist!
Reply
Zoobob111 days ago(+1)

I adore this game and cannot wait for the release! I am soo gonna make fan art

Fun fact, the way they worded it is very good for SEO. having Bunny be first in the title would hurt the game.

he will not rename it anyways name is already awsome lol

the pixel art is very good

Really cute, creepy game! I had a lot of fun playing it, and I love the character designs!

this is gonna be great!

Hey lovely demo you've made here it's so high quality! Very unique gameplay as well even if I suck at rock paper scissors it was fun. The trailer at the end shows even more diversity in the gameplay too which looks like a blast! Good luck on your game and If anyone would like here's my lets play! -

I gotta say, this is definitely one of the best indie game demos I've ever played. It does a great job of introducing the key themes, characters, & gameplay mechanics of the game while leaving enough mystery to keep you wanting more.

I genuinely look forward to the full game & would urge people to try this demo for yourself, even if you've already watched a playthrough or two.

I've left a link to my video if anyone wants to give it a watch. Thanks in advance!

I LOVED this and hope you get all the support you need to finish/get started on it.🤩

I had a blast editing it as well even though I got stuck in the mini-games a lot.🤣

Thank you!! Keep up the good work and stay safe!! 👍

Rabbits, also known as bunnies or bunny rabbits, are small mammals in the family Leporidae (which also contains the hares) of the order Lagomorpha (which also contains the pikas). Oryctolagus cuniculus includes the European rabbit species and its descendants, the world's 305 breeds of domestic rabbit. Sylvilagus includes 13 wild rabbit species, among them the seven types of cottontail. The European rabbit, which has been introduced on every continent except Antarctica, is familiar throughout the world as a wild prey animal and as a domesticated form of livestock and pet. With its widespread effect on ecologies and cultures, the rabbit is, in many areas of the world, a part of daily life—as food, clothing, a companion, and a source of artistic inspiration.

A really interesting game! Definitely should try for yourself. The style of the game is cute and clean. Gonna play the game when it full releases. Fascinating job

I'm super impressed by the game , to be honest I didn't think too much about it but boy was I wrong and I am super hooked on this demo. The beginning was creepy and the part where I kept answering "No"to Skye got me so good I almost throw my chair pillow at the screen. I'm looking forward to the chapters!!!!

Very excited for the full game! This demo really set up a unique world that I can't wait to dive into

love the storyline of this game so far, it has alot of plot twists and filled many mysteries, is skye evil or it has something to do with her handy pals...

Anyways here's my full gameplay together with my reaction, kudos to the developer, LOVEEE IT!

Reply
Y23F45127 days ago(+1)
Credits and much love to you, developer! Thank you for the AWESOME game. I can't wait for the next one. I get to play this in the Philippines!
Reply
swift3dge127 days ago(+1)

This was such a blast to play! Love the style design and the feel! It was a great time and I look forward to the full game!

Reply
sbelly3127 days ago
this was a blast to play, will defo be playing the full release :)
Reply
AltTabHorror130 days ago(+2)

I can't wait for the next Chapters to come out! This is so eerily sinister :3 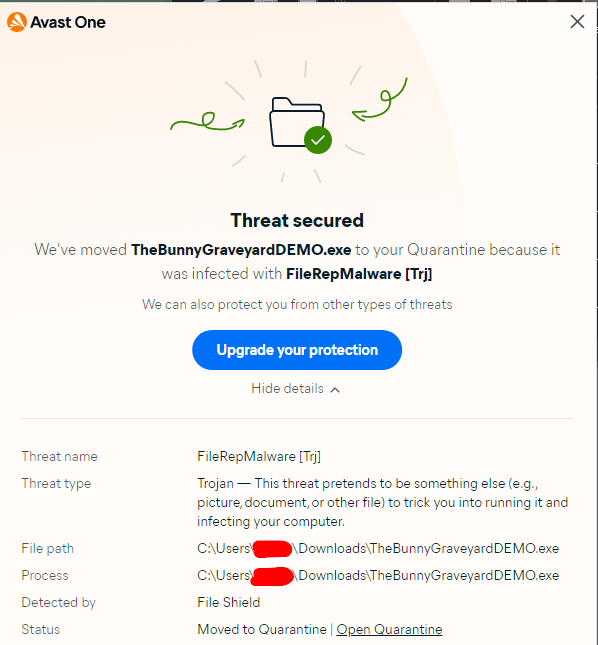 Antiviruses will block random compiled programs it doesn't recognize like that. There should be a button that says "Trust and run anyway".

Alternatively you can run it via Steam

Im not looking to "trust and run a program", when two virus programs mark it as infected. I'll take the steam option tho Ty!

yeah the base windows protecter has that

base windows antivirus based

same happened with me! when it was  done downloading it said that it protected me from an unknown file?? its a fudging game!!

The Steam version doesnt give this warning. Im guessing its something about Virus Softwares and .exe files that marks it as a virus. If youre unsure abt the itchio ver, choose the steam one ^^

i used the steam ver and it worked! thanks a lot!!

Reply
walnutjudas130 days ago(+1)
fun game (:
Reply
Alieann131 days ago(+1)
I seriously loved this demo, I CAN'T WAIT for the full release of the game. Thanks so much for sharing it and congratulations on making such a cool game.

This looks so awesome! I've seen others play it and I can't wait until it's available on MACos!